Let me start this post out by stating plainly: I am not expecting our second child. I know, I know: if you were hoping for an announcement, feel free to exit this screen.

This post was inspired by this lovely little announcement from the loveliest of country music stars:

The moment this photo hit social media, all country music fans sighed a collective breath of catharsis; finally. Our pop-country princess is going to welcome her first baby very soon. Immediately, fans began to congratulate her and her husband on embarking on the greatest adventure this life has to offer.

Along with well-wishes, the photo was met with a little confusion. There was one question that remained,

Is she adopting another puppy?

Look, I’m not one to judge how anyone announces their pregnancy publicly, but I understand why some furrowed their brows. Having recently gone through a public announcement that we were expecting our first child, let me assure you that announcing pregnancy is really intimidating. Long before Pinterest was created, I was well aware that there were many women who were far more creative and crafty than me. Now, Pinterest serves as a reminder that in order to enjoy any season (engagement, wedding day, pregnancy, first year of infancy, new sibling, back to school…etc) we’ve got to make it #vscocam ready. In other words, if it a’int Pinterest-worthy, it a’int going to happen.

Case in point, a Pinterest search for ‘how to announce pregnancy’ will turn up this helpful Pin.

Click for the pin. Seriously, you’re going to love all of these sweet ideas.

I’m not going to lie to you and tell you that I didn’t browse through it when considering how to make our announcement creative and crafty. I did. I loved every idea and gobbled up each suggestion. Then, I had a moment when I realized that if I went with those ideas, it wouldn’t be my idea. My pride got the best of me and I went back to the drawing board. Also, I didn’t have a photographer handy, so most of these were off the table.

It should be noted that I found out I was pregnant and I was completely alone. I took a few tests very early in the morning and I didn’t tell my husband until he arrived home from his business trip, about four days later. It was really hard not to tell anyone. Although, admittedly, I told The Red Cross so that they would stop calling me. Faithfully, the Red Cross called me a few weeks after giving birth. Sometimes, the Red Cross sucks the life out of me. Pun intended. I digress.

I will share how I announced my pregnancy to my husband, my family, and my friends, but, on a deeper level, I will encourage you to create your own idea for how to share this exciting news with the most important people in your life.

1. Make it personal to your relationship. Admittedly, I used my husband’s idea in order to let him know that he was going to be a daddy. Steven proposed with an ‘Amazing Race’ throughout different spots that were unique to our relationship. Most people wouldn’t think to visit a softball field, a sidewalk, and embark on a three mile hike through the snow, but those spots were special to us. I loved how deeply personal Steven’s proposal was and I wanted for him to find out he was going to be a daddy in a similarly personal way.

We had just purchased a house, but we weren’t living in it. So I continued our ‘amazing race,’ through our new home…the place where we would bring home our first child. It was special to us. It was a private moment that we got to share. It was something I will always remember. 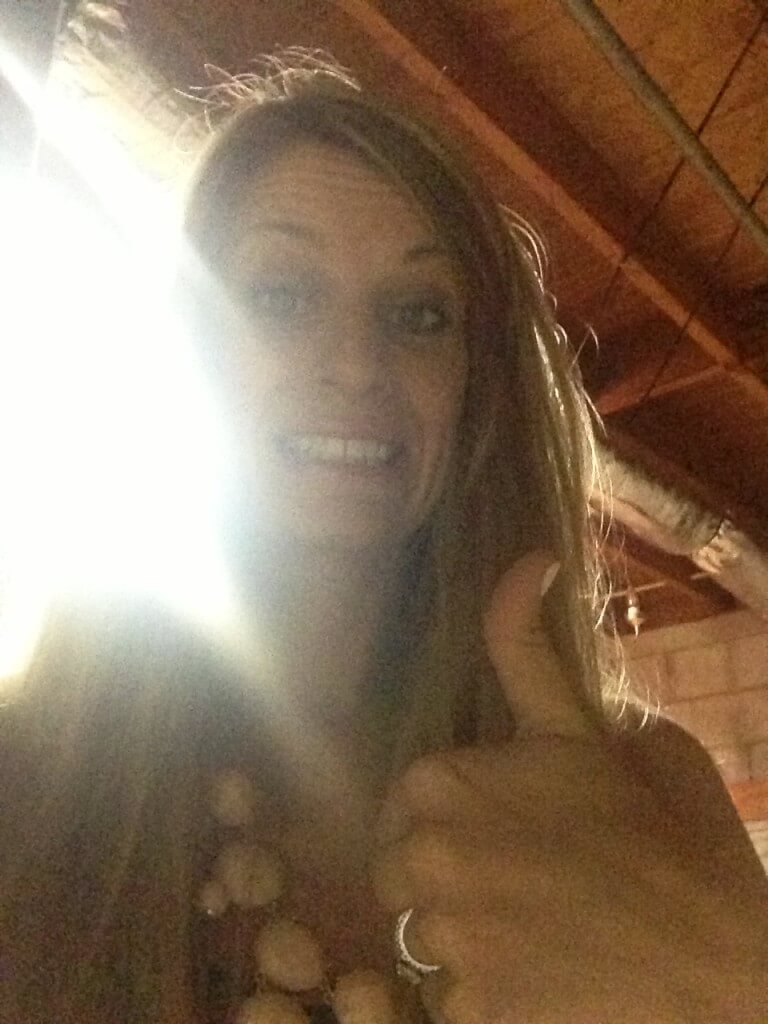 Waiting for S on the garage door 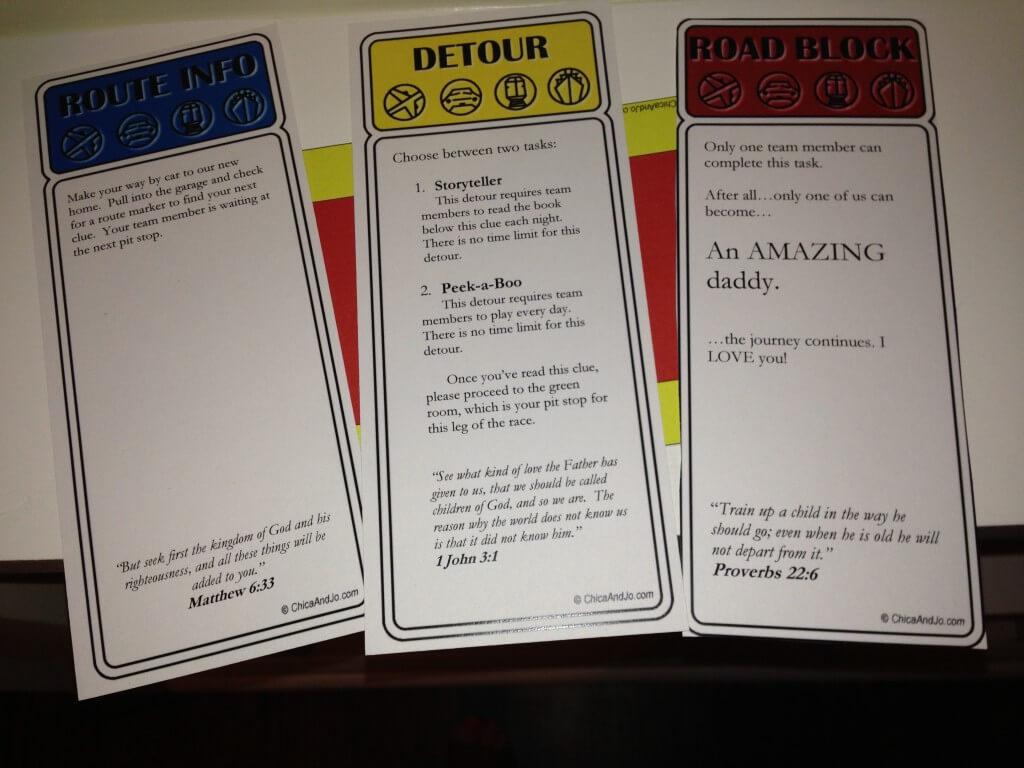 A quick ‘race’ that was even quicker than I thought.

Of course, plans don’t always go as planned. Steven skipped the middle step and walked straight into what would be little B’s nursery. He was so excited and I was relieved to have this secret out to him.

I made him go downstairs and finish the whole race, of course, but something told me Steven knew that I was pregnant when I texted him asking about our health insurance.

It wasn’t perfect, but it was ours. Think about what is unique to your relationship. Do you two like to work out together? Perhaps you can get little baby Jordans to celebrate your arrival (gender neutral of course) or a rattle shaped like a dumbbell; Do you enjoy sci-fi or cos-play? How about a hand-made Darth-Vader card with a “XXXX, you’re going to be a father.”

Think about your relationship and all of its wonderfully unique qualities…and you’ll have a pinterest-worthy announcement. 🙂

2. Make it surprising by announcing it in the most natural way possible.

Some people talk about the weather; I made a habit out of talking about my job (shocking, I know). I love teaching more than anything, and it is not unusual for me to talk about my classroom ideas.

I had prepared a video after attending a summer workshop, that, coincidentally, I had already whined about to my family. It is never unusual Steven to praise my work in front of my family, either. I really have a great cheerleader in my husband.

So, the stage was set. Steven and I decided on the right time to tell our parents, then our siblings, and Steven segued our conversation by saying, “you should see what Bekah made at her web 2.0 workshop. It is pretty cool.”

My parents and Steven’s parents watched politely. They smiled and watched having no idea why they were watching what they were watching. By the end, when I announced that I was expecting there were tears and gasps of shock. I still have videos of their reactions. These are some of the most precious moments of my life.

3. Make sure you’re ready to announce your pregnancy.

I wanted to wait until the halfway point to announce our pregnancy. I thought I could get away with telling people that I was just gaining weight…I made it to 16 weeks with my boss, 18 weeks with the rest of the faculty, and 20 weeks for my friends that I hadn’t seen in a while. Close enough.

I edited the reactions of my family along with the announcement of the gender of our baby and put it on Facebook and my old blog. It was really exciting (and cathartic) to come clean with my secret. Some people take a photo of their positive pregnancy test and put it on social media. That wasn’t for me for a number of reasons, but it is the best option for a lot of people. At this point, I’m betting this is probably one of the more unique ways to announce a pregnancy…

So despite the furrowed brows that met Carrie’s furry baby announcement, I was actually pretty pleased that Carrie decided to announce her baby in a way that was personal to her. Announcing a new baby can be intimidating, but not if you decide to announce in a way that feels personal, natural, and comfortable for you and your spouse.

I want to hear it: how did you announce you were expecting?