As a little girl, the most terrifying ghost stories were always the ones that seemed like the villains were right in my backyard. I once missed a slumber party in which my friends watched the horror film Friday the 13th. I still cannot bring myself to watch the film, but vividly remember a dear friend re-telling me the tale of Freddy Krueger and his sleep attacks. I couldn’t sleep for weeks.

Some of the most terrifying stories happened right in the streets of my fair city, Atlanta during the nineties. With every news headline of a drive-by shooting or drug bust in the rough streets of Atlanta, my fears were realized. The only time my family ever ventured into the mean streets of the ATL was for a Braves game…and even then, we didn’t venture too far from the Fulton County Stadium.

I think most Georgia natives remember the days of the fear of downtown Atlanta; e pecially those residents who have spent some significant time in the suburbs of Atlanta.

Yesterday, little Bear and I finally made our way out of the house. The other day I wrote about a few things to do in the city for free (or cheap). So, the Bear and I made our way to Centennial Olympic park for the free concert in the park. Traditionally, Atlanta mommies make a point to avoid downtown Atlanta. We relegate ourselves to our neighborhood parks and local shops and restaurants. Part of this is the ease of it all; part of it is because downtown costs a pretty penny to park; the last part is the lingering fear of downtown Atlanta.

Y’all: I positively floored by the amount of people who made their way to the heart of my lovely city. And guess what? EVERYONE was wonderful. There was absolutely nothing to fear about this new destination spot in Atlanta. With the recent revitalization of downtown, there are TONS of attractions for families to enjoy. This five on Friday, I wanted to offer just a few of the reasons you should take your families to the heart of it all.

1. The Center for Civil and Human Rights: Beautiful building, and even more beautiful collection of some of the greatest heroes and heroines of all time.

The moment Bear and I made our way into the city, I noticed this beautiful, brand-spanking-new building right in front of the Georgia Aquarium. There were two glass fountains: one with a beautiful quote by Nelson Mandela: “…live in a way that enhances the freedom of others.”

I don’t know about you, but pretty things draw me to them. I had every intention of staying at the Centennial Olympic Park Amphitheater, but as quickly as I arrived, I continued my stroll in the park toward this building…”just to see.”

What started as a free activity quickly became a $15 outing. That was the total cost of the museum and it was worth every single penny. The museum reminds me a lot of the National Constitution Museum in Philly, where history and civics become relevant for all to appreciate. I saw a few familiar faces: one was the secretary of my former employer: CCHS. While may of you may think I have a gift for expression because of my long editorials, it is simply because I have a backspace button. I am not as gifted with verbal communication.

I kept saying the museum was, “fun.” But it wasn’t fun. Was it moving? Yes. Was it a must for everyone to experience? Yes. Was it fun? Perhaps it was fun to see the triumphant stories of those men and women who fought tirelessly against oppression. It was fun to see the moving images of Ruby Bridges, Dr. Martin Luther King Jr.. and other speakers at the March on Washington. It was fun to believe in the strength of the human spirit despite all odds. Was it fun to see members of my race making me ashamed to wear the skin that I have? Absolutely not. It was embarrassing. It was difficult.

The toughest part? The simulated sit-in. I made it 39 seconds before I was legitimately scared and nearly ran away with my baby secured in the K’Tan wrap.

This is a must-see for all in and out of state residents. I highly recommend spending an afternoon here.

2. Imagine It! Children’s Museum of Atlanta: 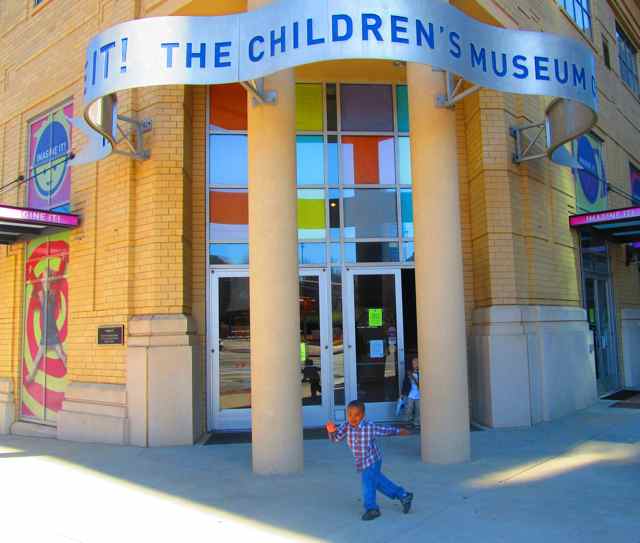 So…on my walk I stumbled upon this particular gem. Had I not been so entranced by the Center for Civil and Human Rights, the bear and I probably would have made our way in here. The museum is free for all children under 1, but $12.75 for everyone over one. It looks like there will be plenty to do with the Bear once he gets a bit older. I love that it was a short distance from the park and within walking distance of a few other kid-friendly attractions.

There is also a TARGET FREE TUESDAY on the second Tuesday of every month. The bear and I will definitely make our way back for one of those dates!

Not my images…I have no idea who these kids are, but there were a ton of kids playing in the fountains!

I cannot tell you how many kids were enjoying the fountain of rings, but I can tell you I wished I brought our bathing suits. For those of you with walking/running kids, this is a perfect destination. There is a “Googie Burger” close by, so if you cannot bring a picnic lunch, there are certainly options…but a picnic would work just as well! This was such a fun activity and it looked like everyone enjoyed the time to be active and meet new friends! So, these tickets may be pricey, but what a cool way to see the whole city in one fell swoop. It’s relatively new and it looks oh-so-fun.

This opens August 23. There really aren’t any words needed.