My day started quite unexpectedly at 1 a.m., as my little bear growled for the better part of an hour and a half.

I had already planned a morning run with a new friend at 5:30 a.m., so this particular post is fueled by very little sleep, a fair amount of caffeine, and an early morning runner’s high.

Normally, my new friend and I chat about long runs, life with a baby (and all that entails), and other generally pleasant topics. This morning, we got into the very delicate issue the Michael Brown case in Ferguson, Missouri. It was unexpected, but encouraging to hear a perspective very similar to my own.

We agreed that the only information we are getting is from the Media, which, unfortunately is laden with sensationalism on both sides of the coin. Somewhere around mile two, I huffed and puffed my personal struggle with the loss of Michael Brown.

“It was really difficult scrolling through my news feed at 1 a.m.,” I exhaled, “I noticed a very obvious divide in opinion between my white friends and my black friends.”

My running friend gave me a “mmmhmmm,” as if she had noticed a similar trend on her newsfeed.

And then, I took a deep breath and gave my heart’s biggest struggle,

“When little B was born, I never worried about people making assumptions based on his race. I have been afforded the opportunity to live as if everyone is ‘colorless,’ and yet, my former students have had to live with racial tension their entire lives. They don’t get to live by the motto ‘ignore racial tension and it will go away.'”

This is white privilege. It isn’t necessarily that white people have a ‘leg up’ because of their race. White privilege simply refers to the idea that likely, your skin color will not determine how people perceive you. It is a sad, unfortunate, and ugly truth.

When my sweet husband was born on this day thirty-five years ago, my in-laws didn’t worry about losing him at an early age because his peers might assault him. Or worse: a police officer may misinterpret his intentions late at night walking on the street. And yet, many of my black friends do worry about this for their little boys and little girls. Not because of a lack of a strong male leader in the household, or a lack of access to quality education, but simply because their little one has a darker shade of skin.

The truth is, white people, myself included, may never understand the struggle in Ferguson, Missouri. Michael Brown’s death is tragic; obviously he was respected and loved in his community. Any loss of life is tragic and should be mourned: no matter what. I understand that he made some terrible decisions leading up to his death but that doesn’t diminish the value of his life. I also understand that the police officer struggled to protect himself and likely struggled for control of his weapon.

Who is Ted Morris?

Morris left his public high school for a private high school in order for him to get the advanced course work he needed. It cost his family thousands of dollars and he identified a glaring problem: under-funded public high schools do not offer coursework for gifted students.

And, at the ripe age of twenty-two, he has been approved to start his own charter high school, so that, students who cannot afford private education can receive the same quality coursework as their financially privileged neighbors.

And he is getting backlash from educational professionals around him. Can a twenty-two year old without administrative or teaching experience really begin a successful public charter school? 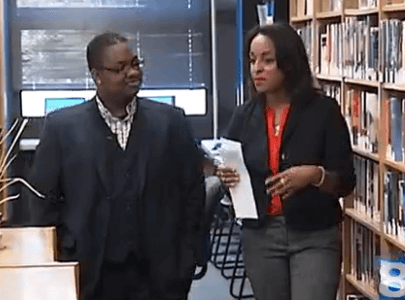 I believe, unequivocally, yes. He has been in the public school system; he has a board of directors; he identified a glaring need and plans to address those inside of his school.

This is a young man to rally behind. A man who, realistically, came from a middle-class beginning at best, and is making a real impact in his community. Not because he fought with a police officer, but because he genuinely cares about his neighbors. He genuinely believes that his community deserves better for free.

Is Ted Morris immune to the binds of race? No. Is he using his race as an excuse to simply ‘get out?’ No. He believes in the power of education; he is a man that we should be talking about.

Again, I am not suggesting that we ignore the story of Michael Brown all together. His story deserves to be heard. His life deserves validation. While he made some poor decisions, he did not deserve to lose his life. But then again, neither did the police officer.

I believe in the power of peaceful protest. This freedom shouldn’t be taken away from the citizens of Ferguson. Period.

Still, I think, if we are going to have a conversation about race, we should address unequal education. We should rally behind a man who wants to avoid the loss of Michael Brown in the future by equipping under-funded young minds with the same benefits as their financially privileged peers.

What are YOUR thoughts on Ferguson, Missouri?