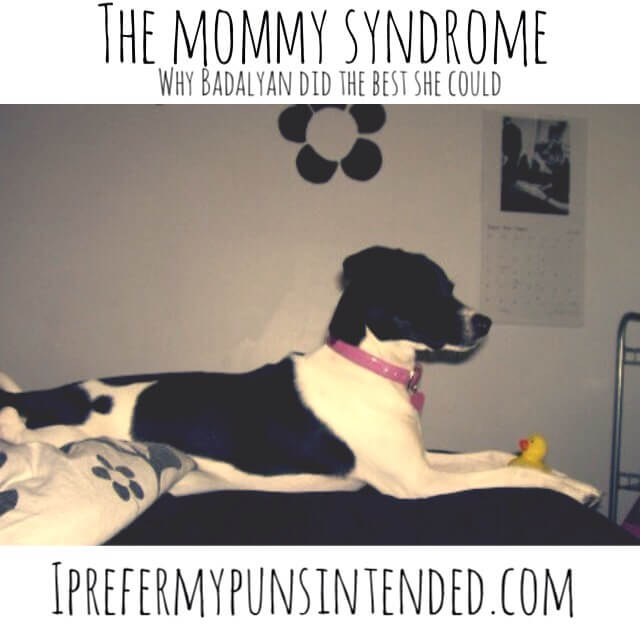 It only took me a year to surrender my little dog, Lola.

I had gotten her as a gift from a college boyfriend; she stayed with me long after he and I had our final goodbyes.

We lied when we adopted her, telling the agency that she would be staying in a large backyard with room to run. Instead, Lola lived most of her life with me in a crate college duplex. She and I would go walking a few times a week, but it was never enough to satiate her need to run…and run…and run…and run. I used to call it “war-path-ing.” She was fast and furious; often running in circles until I had to hold her to stop. Looking back, I am pretty sure she had some form of epilepsy or an intellectual handicap. The vets never diagnosed her, but…I lived with her.

Still, it wasn’t her hyperactive temperament that made me give her up. I loved that dog the best way I knew how to love her. But I was a terrible fur mom. I had no fur-mom instincts, and I’m actually not sure that’s a thing.

It wasn’t even my lack of responsible fur-mom decisions that made me give her back. In fact, I would venture to say that was the most loving thing I ever did for my little pup; the day I gave her back was the day that her life began.

Indeed, I failed as a puppy mom. I carried that failure with me for years. I remember wondering if I could hack it as a human mom, when the stakes were much higher and you can’t give that baby back.

Or can you? Recent news has broken the story of the Armenian mother who surrendered her son who was diagnosed with Down’s Syndrome. The husband maintains that she gave him an ultimatum (him or me), and the two divorced just a week after.

This past Saturday, the mother of little Leo came forward with her side of the story. I cannot pretend to fully understand the predicament of an Armenian mother, but I do understand what happens when you become a mother.

I remember that I have never been more thrilled to hear a baby cry than the moment my son entered the world.

NICU nurses waited patiently to attend to my little guy as soon as he was born. I was told not to expect to hear him cry; he had swallowed some fluid that would prohibit him from taking his first breaths. Let me tell you–I was painstakingly pleading with God for my little one to cry–and cry loudly.

When my little fighter came out screaming; and I was a goner from the moment I saw him. I loved him more than I knew it was possible to love a little human being and without any explanation. In the first few moments I shared with my son, I felt things I didn’t know I was capable of feeling. And suddenly, mama bear was born.

As a mama bear, I had a voracious appetite for protection.

So why would a mother choose to give up their otherwise perfectly healthy baby? And beyond that, how could they divorce the man who gave them this perfect gift?

It seems to most that the mother of little Leo did just what I did as a 20 year old college student of my fur ball with epileptic symptoms; she gave the child away to the person she believed would give her son the best life.

In recent interviews she admits that she wouldn’t be able to support little Leo in a country with,

“no extensive social infrastructure to help children with developmental disabilities, no governmental support, with the continuous hard economic situation in the country, with the possibility of renewed war with our hostile neighbor–with whom the fragile cease-fire seems to be deteriorating over time–always looming in the background, with my salary of 180$ being partly supported by my sister and living in my mother’s place and having no other income, as my husband did not work, I would not be able to raise my child with special needs.”

Leo’s father reportedly agreed with her assessment and has been quoted as saying that the couple couldn’t afford the life he deserves in Armenia.

The truth is, nothing–and I do mean nothing–could have taken my newborn son from my arms. I would have done everything I could have to keep him with me. But I live in the United States of America; we don’t have the threat of war “looming in the background;” my husband and I have the means to financially support our baby, no matter the physical obstacle. I have been granted the beautiful gift of responsibility for my son; and so has Ruzzana Badalyan.

Unlike my college-aged fur-mom scenario, Leo is not a dog; Leo is a human being. After reading this developing story, I am torn as a mother. In my heart, I know that I would want to hold onto my newborn son for dear life, no matter what chromosomes he was born with. And then, I consider agony of the reality that the only choice for Leo’s quality of life is to have to surrender the most precious person in the world; a newborn son.

And so, amidst the emotional tug-of-war in my heart, I know that Ruzzana made the decision she believed was best for her precious little boy. Especially when I read that she is “thrilled,” by the funds raised for her little boy on the GoFundMe page and she acknowledges that Samuel Forrest is a ‘caring father,’ who will ‘do the best for Leo.’

Ruzzana doesn’t want the spotlight; she doesn’t want a dime for herself; all that she wants is for her baby to have a prosperous life with his father, Samuel, in New Zealand.

As for the questioning feminists in their response to Forrests’ heroism, the gender equality argument here is simplistic at best. We shouldn’t negate his heroism because of his gender. And, oddly enough, this particular story about a mother sacrificing her life for her unborn baby had all of us (rightfully) lauding her as a. So yes; I believe a mother who faced similar odds as Forrest would be touted as a hero.

And Badalyan would want you to consider Forrest, the primary caregiver of her son, a hero. When she became a mother, she acquired the mommy syndrome, where absolutely nothing would stand in her way of protecting the life of her child; not even sacrificing her life with her son. Much like the moment I gave up little Lola, perhaps Badalyan believes that the moment she surrendered Leo was the moment his life could begin…and, much like the moment I waited to hear little Bennett cry, she just wanted that life to begin as soon as possible.