Those that know me best know to bring tissues with them wherever we go. It can happen at any moment, for varying reasons, but for some reason, I’ve never been able to control the tears that glide unbridled from the corners of my eyes.

It used to be a lot worse; I distinctly remember crying after overhearing my parents discuss moving away from my childhood home. And no, I wasn’t crying because I could potentially leave my friends. This pain ran much deeper.

My sister was cried quietly at the thought of her young life changing forever. I sat across from her at the table, tears rolling uncontrollably down my six-year-old-cheeks.

“We can’t move…” I heaved in and out, red-faced and swollen, “my school,” I couldn’t catch my breath, “ is a school of excellence.” 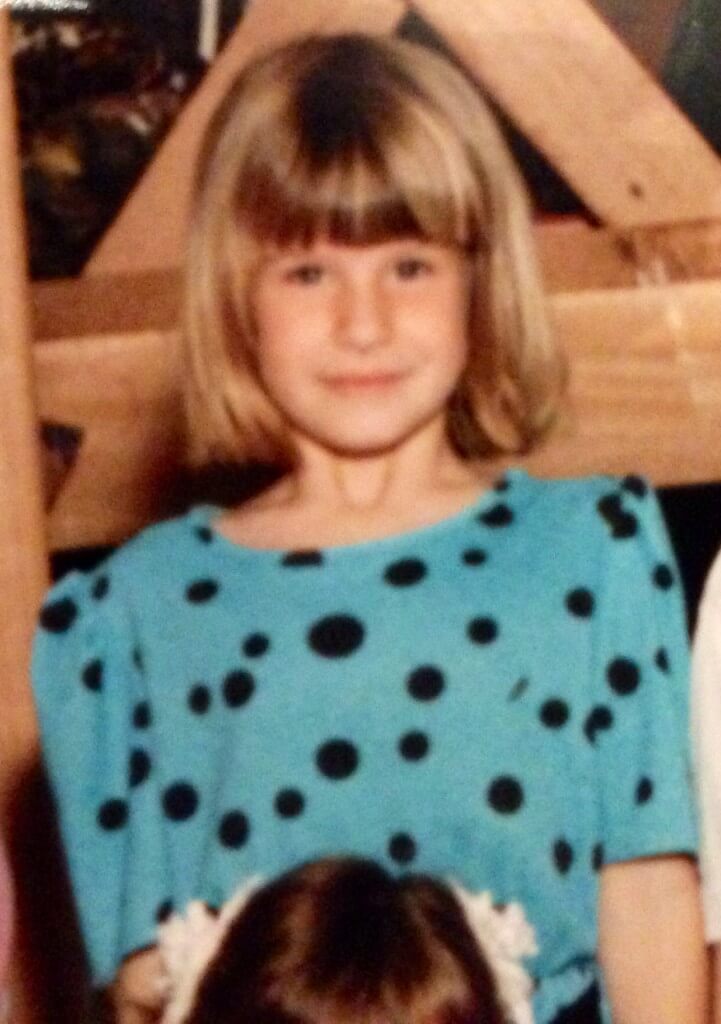 Don’t you take me away from my school of excellence. Kindergarten photo

That line would live on in infamy for the rest of my childhood…and adulthood. Suffice it to say I cried a lot, and everyone in my life took notice of my sensitive heart. I got ‘most considerate,’ five out of the six years in elementary school. The other award I got was for ‘best citizenship,’ and I’m pretty sure that’s the same thing. 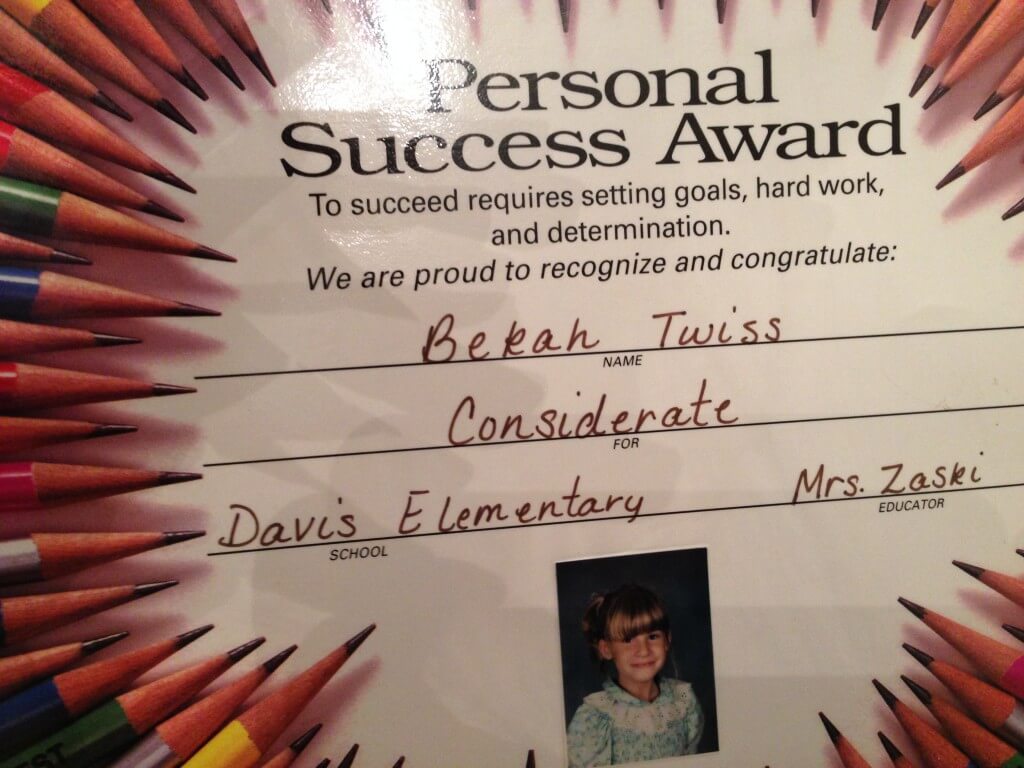 I’ve mused endlessly over the merits of my sensitivity. I empathize to the point where I feel physical pain for those who are hurting. I found a character I truly identified in John Coffey of the Green Mile; he tries to take it all away, but he can’t. I feel so deeply that sometimes it debilitates me. During my student teaching, I had to take a sick day because a student informed me that she was being abused. I still hurt thinking about her. I still remember her face begging me not to tell anyone; it was my first time in the counseling suite, but I had to alert the officials. Physical ailments aside, I find that my sensitivity makes me a better teacher; a caring mother; a more loyal friend. My tears are not a liability all of the time.

From 1991 to 2011, I grew up a lot. I always thought I would cry when my boyfriend proposed because of my hyper-sensitivity. I didn’t. I was so excited to be marrying Steven that I couldn’t do anything but smile. He was the best man I had ever met, and he was going to be my husband and the father of my children. I didn’t want to mire our engagement with my tears.

Around the same time of our engagement, Hope and Steve began dating. I didn’t know anything about these two, despite us attending the same college and graduating at the same time (Go Dawgs!). In fact, I didn’t find out about this couple until an episode of “Say Yes To The Dress Atlanta,” as I fed my on-going addiction to all things wedding (after being married for a few months.) After watching this episode, I couldn’t forget this particular blushing bride. 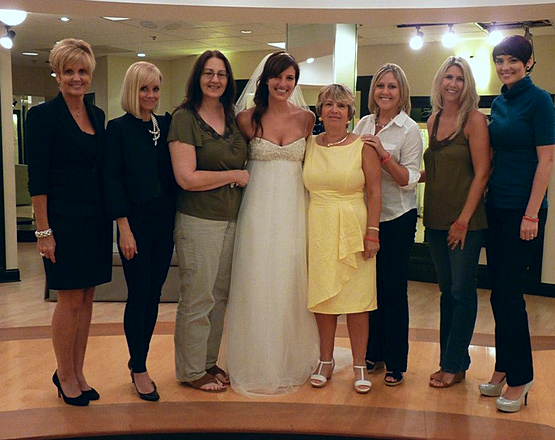 Certainly, Hope is a beautiful bride. Her entourage is lovely as well. The episode would’ve been just okay however if her beauty, and the beauty of her friends and family, could simply be contained in this photograph. But her beauty is boundless; and her beauty brought the sensitive little girl out of me once again. When I heard her story, I couldn’t stop the tears from rolling down my face. Even now, as I begin to re-watch the opening scene of Hope’s ‘SYTTD’ episode, I am wrecked with tears.

You see, Hope was working on a very short timeline. Her fiancé proposed just two days after being diagnosed with ALS. They planned to wed in a month.

Before a few weeks ago, you may not have heard of this devastating and debilitating disease. Now, you may know it as the disease that successfully doused all of your friends with ice water.

I think about Hope a lot. I think about the fact that she attends Northpoint Church with her husband Steve. I think about her as we probably sing the same worship songs about God’s faithfulness. And then I get so choked up, it takes me all day to write a blog post. Seriously.

This Sunday, Steve’s story became a teaser for Andy Stanley’s “In The Meantime,” as Steve looked on from the audience. Following the footage of his baptism, the congregation sang, “Never Once” by Matt Redman.

There is something so beautiful about the fact that Hope Dezember can stand and sing these words and mean them. There is something that doesn’t quite make sense about the idea that Hope can praise the God that gave her the love of her life and continue to praise him despite her inability to hear her beloved’s voice, feel his touch, or bear his children. She and Steve have made it their goal to enjoy every moment and live the rest of his days thankful for the moments they still have together.

When I think about the two of them and the true love they have for each other, I consider my own shortcomings as a wife: not in the dinners that don’t get made or the dishes that are in the sink, but the fact that I get irrationally mad when Steven puts a dish in the dishwasher “incorrectly” or leaves the toilet seat up. Sometimes, it takes all I have to muster enough strength to give my husband a goodnight hug and kiss.

Then I think about Hope. I think about what she would give for Steve to be able to load the dishwasher, use the toilet, or passionately embrace his beloved. I think about whether or not she would trade places with Steve given the chance. Because I know that she would’ve married Steve whether he had ALS or not. I know this because I am sensitive. I also know that my tears can, sometimes be self-serving. I cried when my parents were thinking about moving because I wanted to stay in my school of excellence, after all. And Hope is anything but self-serving. The only time I’ve seen her cry during an interview is when Steve mentioned that he ‘(didn’t) care if (he) died,’ and she quietly welled up and whispered, “I care.”

Emily Dickinson once wrote that “hope is the thing with feathers/that perches in the soul,” and in the same poem she writes that “sweetest – in the Gale – is heard -And sore must be the storm -That could abash the little Bird- That kept so many warm.”

Dickinson argues that Hope becomes stronger in the storm. I think Steve would agree. Hope has been consistent in her devotion to her husband, and optimistic throughout each moment of their difficult journey. The storm could’ve gotten the best of her, but instead she keeps those around her ‘warm’ with her strength and passion.

Steve has spent the last three years fully cognizant that his body is degenerating and there is nothing that he can do to stop it. His hands were the first to go, and slowly everything else succumbed to paralysis. If you’ve ever wondered how Steve can still believe that God is faithful, take a look at his wife. She models Christ’s perfect love for all of us every single day.

Great…here come the tears again. At least this time, these tears are totally justifiable.

If you’re interested in donating or learning more about the Dezember’s story, visit the Hope For Steve homepage or click here for the Hope for Steve Paypal link.